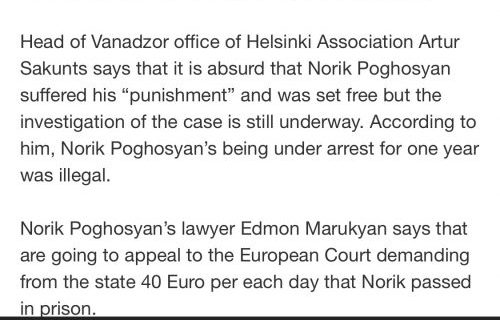 The applicant, Norik Poghosyan, is an Armenian national who was born in 1983 and lives in the
village of Metsavan (Armenia).
The case concerned the right to compensation under Armenian law for unlawful detention.
Mr Poghosyan was detained from October 2008 on drug-related charges. He was found guilty as
charged in October 2009 and sentenced to three years’ imprisonment. He was released in April 2010 after serving his sentence. In the meantime, however, the judgments convicting him had been quashed, the appeal court ruling that the evidence used against the applicant had been obtained in breach of his right to defence.
The case was remitted for fresh examination and the applicant was acquitted in October 2010.
He lodged a civil claim for compensation in July 2011, arguing that his acquittal rendered unlawful the time he had spent in detention. The civil courts allowed his claim for pecuniary damage, but not for non-pecuniary damage because such compensation was not provided for under domestic law.
Relying on Article 5 § 5 (enforceable right to compensation), Mr Poghosyan complained that he had been denied compensation for non-pecuniary damage for his unlawful detention.
The Court stated: Violation of Article 5 § 5
Just satisfaction: EUR 6,000 (non-pecuniary damage)