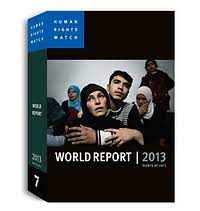 In the 665-page report, its 23rd annual review of human rights practices around the globe, Human Rights Watch summarized major issues in more than 90 countries. Report on Armenia reads: “Armenia’s ruling coalition retained a parliamentary majority following the May 2012 elections amid allegations of abuse of administrative resources, and intimidation of voters, observers, and journalists. Ill-treatment in police custody persists. The government has yet to offer conscientious objectors a genuine civilian alternative to military service and has failed to effectively investigate a troubling number of non-combat deaths in the military.

Politically motivated defamation lawsuits no longer appear to be a problem, but media pluralism is lacking, and some journalists covering the May 6 parliamentary elections suffered violent attacks by onlookers, some of them members of Armenia’s ruling political party. Violence and discrimination based on sexual orientation are serious problems. Bureaucratic restrictions prevent people with terminal illnesses from accessing strong pain medications.”