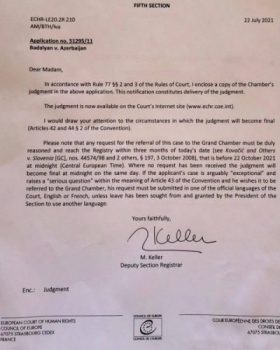 The President of the “Center for Strategic Litigations” NGO stated that: “Today the judgement of European Court of Human Rights regarding Armenian captive held in Azerbaijan was received.
According to the ECHR rules, in the case of Badalyan v. Azerbaijan, the Azerbaijani government has 3 months to appeal the decision to the ECHR Grand Chamber.
If it is not appealed by October 22, it will come into force, but once if it is appealed, then we still have a fight to give in the ECHR Grand Chamber.
I am sure we will register a victory in this case there as well.
Let’s wait for the developments.”, – said Mr. Marukyan on his facebook page.